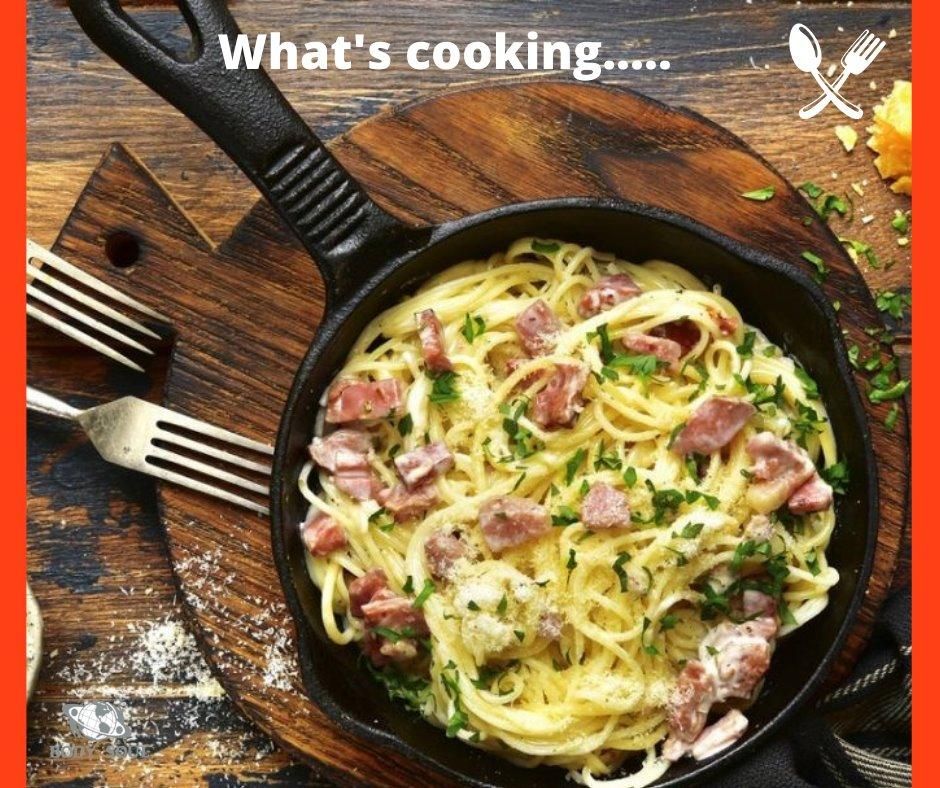 Carbonara is an Italian pasta dish from Rome made with egg, hard cheese, cured pork, and black pepper. The dish arrived at its modern form, with its current name, in the middle of the 20th century.
The cheese is usually Pecorino Romano, Parmigiano-Reggiano, or a combination of the two. Spaghetti is the most common pasta, but fettuccine, rigatoni, linguine, or bucatini are also used. Normally guanciale or pancetta are used for the meat component, but lardons of smoked bacon are a common substitute outside Italy
As with many recipes, the origins of the dish and its name are obscure; however, most sources trace its origin to the region of Lazio.
The dish forms part of a family of dishes involving pasta with bacon, cheese and pepper, one of which is pasta alla gricia. Indeed, it is very similar to pasta cacio e uova, a dish dressed with melted lard and a mixture of eggs and cheese, which is documented as long ago as 1839, and, according to some researchers and older Italians, may have been the pre-Second World War name of carbonara.
There are many theories for the origin of the name carbonara, which is likely more recent than the dish itself. Since the name is derived from carbonaro (the Italian word for ‘charcoal burner’), some believe the dish was first made as a hearty meal for Italian charcoal workers.

Put a large saucepan of water on to boil.
STEP 2
Finely chop the 100g pancetta, having first removed any rind. Finely grate 50g pecorino cheese and 50g parmesan and mix them together.
STEP 3
Beat the 3 large eggs in a medium bowl and season with a little freshly grated black pepper. Set everything aside.
STEP 4
Add 1 tsp salt to the boiling water, add 350g spaghetti and when the water comes back to the boil, cook at a constant simmer, covered, for 10 minutes or until al dente (just cooked).
STEP 5
Squash 2 peeled plump garlic cloves with the blade of a knife, just to bruise it.
STEP 6
While the spaghetti is cooking, fry the pancetta with the garlic. Drop 50g unsalted butter into a large frying pan or wok and, as soon as the butter has melted, tip in the pancetta and garlic.
STEP 7
Leave to cook on a medium heat for about 5 minutes, stirring often, until the pancetta is golden and crisp. The garlic has now imparted its flavour, so take it out with a slotted spoon and discard.
STEP 8
Keep the heat under the pancetta on low. When the pasta is ready, lift it from the water with a pasta fork or tongs and put it in the frying pan with the pancetta. Don’t worry if a little water drops in the pan as well (you want this to happen) and don’t throw the pasta water away yet.
STEP 9
Mix most of the cheese in with the eggs, keeping a small handful back for sprinkling over later.
STEP 10
Take the pan of spaghetti and pancetta off the heat. Now quickly pour in the eggs and cheese. Using the tongs or a long fork, lift up the spaghetti so it mixes easily with the egg mixture, which thickens but doesn’t scramble, and everything is coated.
STEP 11
Add extra pasta cooking water to keep it saucy (several tablespoons should do it). You don’t want it wet, just moist. Season with a little salt, if needed.
STEP 12
Use a long-pronged fork to twist the pasta on to the serving plate or bowl. Serve immediately with a little sprinkling of the remaining cheese and a grating of black pepper. If the dish does get a little dry before serving, splash in some more hot pasta water and the glossy sauciness will be revived.

Interested in cooking classes in Italy to taste this dish?