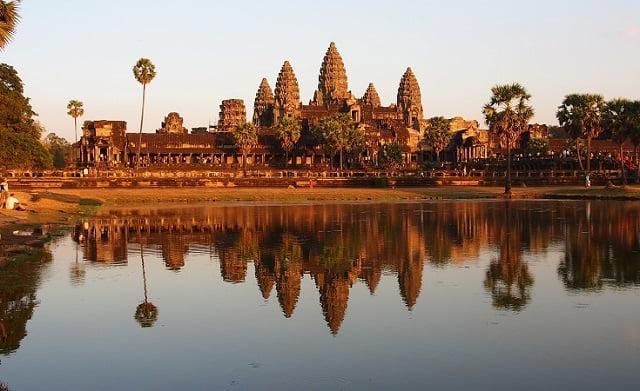 Most of us probably know Rudyard Kipling’s book The Jungle Book and its 1967 Disney cartoon with its catchy sing-along songs like “I Wanna Be Like You” and “Look For The Bear Necessities,” and there’s the 2016 Disney live-action remake as well as its many other adaptations in film. But Kipling’s lost city of the monkeys with King Louie was actually based (or inspired by) the tales of a real lost city. That city is Ankor Wat.

In actual point of fact, this magnificent city was never lost, just abandoned. The site and surrounding area would remain inhabited by villagers and farmers but the vast city was progressively abandoned and the jungle returned to claim much of the deserted and unmaintained city.

Angkor Wat is one of the most stunning, most awe-inspiring sites you will ever see. And most of its ancient temples are still standing!

Visa Policy Of Cambodia: Visa On Arrival (One Month)
Flag Of Cambodia: The Flag Prominently Depicts Angkor Wat
Currency: Cambodian Riel (But Effectively USD – Do Not Exchange Your Money)
How To Get There
Angkor Wat is in northwestern Cambodia, the adjacent town and gateway is Siem Riep – this is a beautiful town in its own right. To go to Angkor Wat, travel to Siem Reap, this small city has an international airport, or fly to the capital Phnom Penn and take the bus from there. Every tourist who goes to Siem Reap is going to Angkor Wat so everything is set up for it. Just tell your hotel which day you would like to go and they will organize a tuk-tuk taxi to take you. The distances are large as you are visiting the temple ruins of a large city so the tuk-tuk taxi will drive you from temple to temple throughout the day.

Most popular is for the taxi to pick you up from your hotel at around 4.30 am (so have an early night before). You will buy the entrance ticket at the entrance and then you want to be at the front of the main temple before and for sunrise. The view of the lost city at sunrise with the temple reflecting off the pools in front is unforgettable.

Remember this is a city or massive temple complex so the temple you see in the pictures or on the flag is only the first (and greatest temple) but there are scores more. There are innumerable walls, moats, libraries, other temples, and all sorts of structures all around the complex. And yes monkeys live among them. Although they don’t normally kidnap boys and bring them to their king and then demand the secret of man’s red flower!

The imagines of the city overgrown and returning back to the jungle are not of the main temple, they are to be found in other structures around the complex.

What To Bring
Comfortable Shoes: You Will Be Walking A Lot And Climbing Many Stairs
Sunscreen: You Will Be In The Sun A Lot
Food: Food Is Not Needed, You Can Buy Local Food Inside The Park
Camera: Duh!
What To Expect
Exploring the whole complex at Angkor Wat takes a whole day. That being said, most will finish in the middle afternoon as they started at 4.30 am! Be sure to read up on its rich history before you go as this will help to really bring the City of Temples back to life and put so much more meaning in what you are seeing. Also, remember it’s only the large public structures like the temples and the walls that survive today. Most of the residential parts of this large city are not visible and have not been excavated. They have been all reclaimed by the jungle.

Another thing to prepare yourself for is that in ordinary circumstances (i.e. Pre Pandemic), Angkor Wat is very popular as a destination. Consequently, as large as it is, it can be very crowded and this can make it a little frustrating taking your Instagram pics at the choice spots. This can be even more frustrating when other tourists don’t seem to respect the sanctity of the queue!

Take your time when exploring the various temples and really take in the truly magnificent architecture and craftsmanship of this complex. The temples are full of statues, artwork, and reliefs (including topless women – as was common in historical times for this region). Besides the main temple, other temples of note include:

Ta Prohm Temple: (This temple has many of the trees overgrowing the temple)
Chau Say Tevoda Temple: These are smaller structures
Ta Keo: Also very impressive ruins
Bayon Temple: This large complex includes Terrace of the Elephants
In short, visiting the “Lost City” the “City Of Temples” of Angkor Wat is one of the must-sees of traveling for everyone!