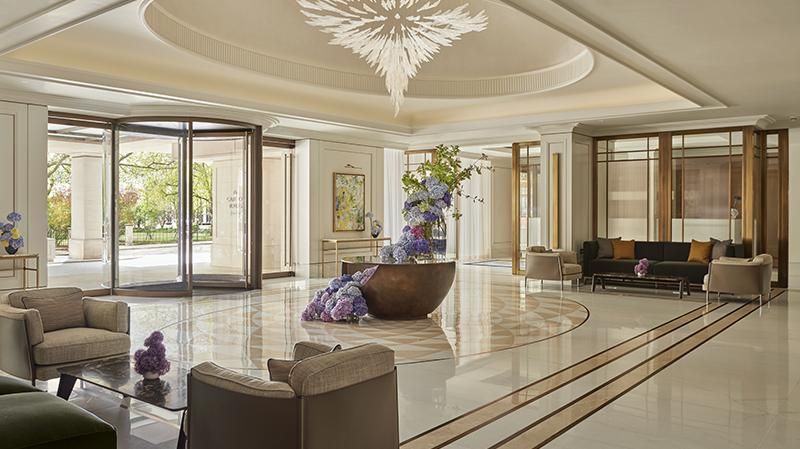 The Carlton Tower Jumeirah has opened in the heart of London’s fashionable Knightsbridge district following a $137 million, 18-month renovation, which refreshed the rooms and added new dining choices, spa and lobby entrance.

Previously known as Jumeirah Carlton Tower, The Carlton Tower Jumeirah has launched under a new name to reflect the significance of the most extensive transformation in its history.

Originally designed 60 years ago by Henry End, also responsible for the interiors of New York’s Plaza Hotel, the five-star property was redesigned by 1508 London. While respecting the building’s original, clean modernist style, the design studio layered an eclectic mix inspired by the architecture of surrounding mansion blocks and homes with soft curved edges, pops of bright colour and organic inspired forms throughout.

Among the changes, there is a new foyer and reception, health club and spa with London’s “largest naturally lit swimming pool,” flagship restaurant, lobby bar and lounge, ballroom and meeting rooms.

The number of rooms has been reduced from 216 to 186 to allow more space and natural light. Of these, 87 rooms have balconies offering views of the city. The new Royal Suite is the hotel’s most exclusive residence with three bedrooms and comes with an option to privatize the entire floor.

The destination restaurant Al Mare, meaning “at the sea” in Italian, offers a sophisticated yet informal dining experience for guests. Head Chef Marco Calenzo, who has previously worked in Michelin stars from Tokyo to Hawaii, draws from his Italian heritage to design the menu of light and modern Italian fare complemented by a wine list and artisanal cocktails. Accessed from the lobby is The Chinoiserie, an all-day dining area that won the “Afternoon Tea of the Year” award in 2018. The hotel has also partnered with Annabel Karmel, an award-winning children’s cookery and nutrition expert based in the U.K., to design children’s menus at both restaurants.

The Peak Fitness Club & Spa, covering three floors of the hotel, has been completely redesigned with new treatment rooms at the Talise Spa and a revitalized swimming pool with new cabanas and thermal areas. The gym overlooks the city and offers studio classes and latest exercise equipment. In addition, the hotel sits on Cadogen Gardens, which offers a lush and private green space for additional wellness recreation such as yoga and tennis.

The hotel’s ballroom on the first-floor seats up to 400 people and can be entered by private entrance or via a grand staircase with a cascading chandelier. In addition, there are three contemporary meeting rooms, filled with natural light and overlooking the gardens.

Centrally located, the Jumeirah Carlton Tower hotel is steps away from luxury shopping at Harrods and Sloane Street, cultural institutions like the Victoria and Albert Museum, and several local restaurants. Flights are offered daily from major U.S. cities on Delta, United, American and British Airways airlines into Heathrow, Gatwick, London City, London Luton and London Stansted airports, all within an appropriate distance to the hotel.  Guests flying in can also enjoy chauffeur services and airport transfers.

For more hotel options and travel ideias in London