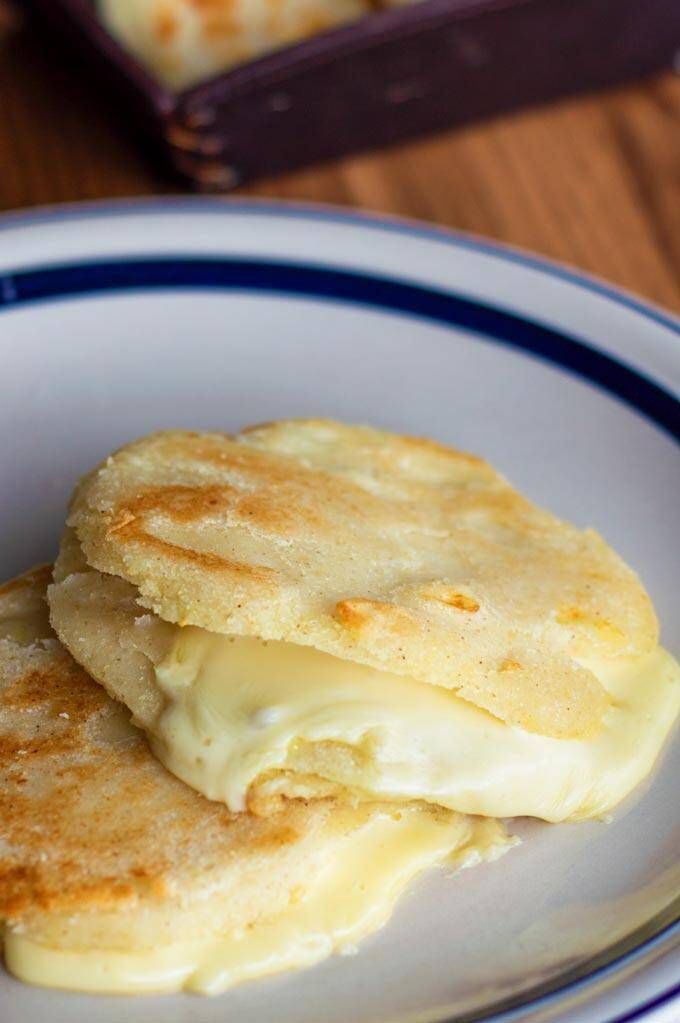 Arepa is a pre-Columbian dish based on corn and filled with cheese, very popular in Venezuela, Colombia, Bolivia and Panama (where it’s known as tortilla and changa).

WHAT IS AN AREPA DE QUESO?
Arepa de queso (or cheese arepas) is a very popular variation of the traditional arepas that apart from being stuffed with cheese, also have cheese in their preparation, turning the dough a bit saltier than the original.

Typically, the cheese used to make this recipe is queso costeño (in Colombia) or queso llanero (in Venezuela, also called “hand cheese”). Both are soft textured and can be shaped and manipulated for doughs and different fillings.

Both queso llanero and queso costeño are whiter and saltier than similar cheeses (such as the traditional queso fresco), making their presence stand out in every recipe they are in.

WHAT IS THE ORIGIN OF THE WORD AREPA?
It is believed that the word arepa comes from erepa that meant “corn” for the Cumanagota ethnicity. The Spanish referred to this variation as maíz cariaco (cariac corn).

However, there are older records that show that different Indigenous populations in Venezuela and Colombia used the expression “arepa” to call a food based on corn many years prior to the first colonizers arriving in America.

In Santander department, in Colombia, arepas as they are known today, were called tijitafun by the native Guanes.

The oldest reference found of this word may be present in Pedro Simón’s work, “Noticias Historiales de las conquistas de Tierra Firme en las Indias Occidentales” (1626) and in “Historia del Nuevo Mundo” by Bernabé Cobo (1653). Both refer to them as “cakes as thick as a finger”

COLOMBIAN VS. VENEZUELAN VERSION
The main difference between an arepa made in Colombia and one prepared in Venezuela is that the latter is traditionally filled with cheese.

In Colombia, the Venezuelan version is called arepa con todo (arepa with everything), since they are made with a lot of fillings: meat, black beans, plantain, avocado, chicken, among others.

From these combinations the most famous arepas in Venezuela are born: pelúa, stuffed with shredded meat and shredded yellow cheese, and reina pepiada, with chicken, mayonnaise and avocado.

In Colombia, these small corn cakes are not usually stuffed (except for particular cases such as egg arepas, in the region of Luruaco), but served with some butter and cheese on top.

Even if this difference is quite evident nowadays, truth be told, they started being stuffed in Venezuela around the middle of the twentieth century. Before that, Venezuelan arepas were served as a side, the same way as bread. In the Antioquía region, in Colombia, they are still served that way.

WHAT ARE THE OTHER VERSIONS OF AREPAS?
Besides Colombia and Venezuela, where different versions of arepas can be found based on the type of corn used for their filling, other countries serve arepas as well.

In Spain, arepas are present in the region of the Canary Islands, due to the high concentration of Venezuelan immigrants. They can be found in Santa Cruz de Tenerife, being less common in the west side of the territory.

They are mostly served fried and local ingredients are added, such as tender cheese.

In Bolivia, arepas are made based on corn. There are different versions across the country but the most popular are the ones from the region of Cotoca, in which cheese is also used in the dough.

Some similar recipes from other countries are the gorditas, in Mexico, the pupusas from Honduras and El Salvador, and tortillas panameñas, from Panama.

Instructions
Place the flour and salt into a large bowl, gradually add the water, and mix well by hand.
Add 4 tablespoons melted butter and a quarter of the cheese, and knead for 15 minutes to obtain a slightly sticky dough. Add more flour (if the dough is too wet) or water (if it’s too dry) as necessary until the dough is smooth and slightly tacky.
On a floured work surface, divide the dough into 4 equal pieces.
Flatten one with the palm of your hand to form a patty about ¼ inch (5mm thick).
Heat the rest of the butter in a frying pan or on an electric hotplate.
Brown the 4 patties over medium heat for 5 minutes, turning them regularly.
Once the arepas are fried, golden and cooked in the center, very carefully cut them in half (to make two equal circles) without breaking them, and fill with cheese.
Place the arepas back onto the skillet over a low heat to melt the cheese.
Serve immediately.