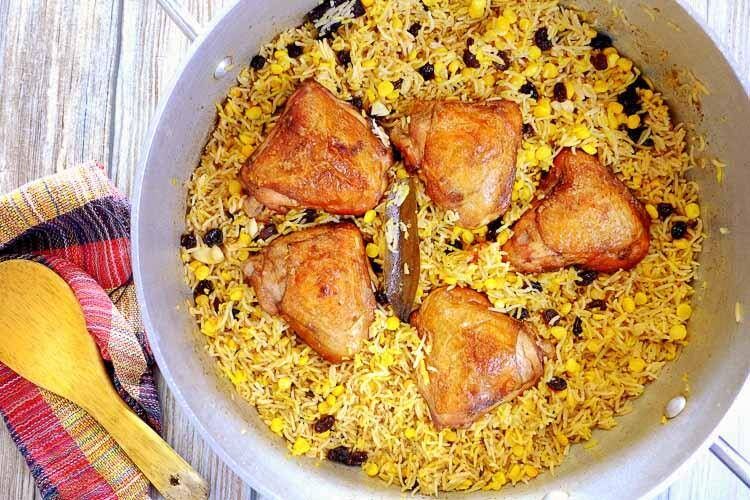 Chicken majboos is a traditional recipe from the Sultanate of Oman, the United Arab Emirates and the entire Persian Gulf region.

OMANI CUISINE
Oman is a sultanate of the Middle East bordering the United Arab Emirates to the northwest, Saudi Arabia to the west and Yemen to the southwest. It overlooks the Arabian Sea to the south and east, on the Gulf of Oman to the northeast.

Omani cuisine is a real melting pot for the palate. The Sultanate of Oman offers a rich cuisine with diverse influences.

India and Pakistan were the first sources of inspiration. The massive immigration of Indians and Pakistanis, mainly as construction workers, had an impact on the eating habits of the Omanis.

Sri Lanka and Zanzibar, a former Omani colony, have also left their mark, as have the many recently arrived Asians, mainly Thais and Malays.

The European influence is also noticeable, mainly French and English.

Shuwa, which is the main dish, is a lamb dish stewed for 48 hours in a kind of underground sand oven. The lamb, previously marinated, is wrapped in a banana or palm leaf for cooking during which no steam should escape.

Biryani rice, flavored with saffron, is served on a large plate. With meat, lamb, chicken or fish, often with tuna, everything is grilled over a fire. The rice is flavored with tomato, chili and onion sauce. It is often accompanied by a salad. There is also a barbecue version in which the lamb or chicken skewers are marinated in spicy yogurt and then grilled.

HOW TO MAKE CHICKEN MAJBOOS
Chicken majboos is very close to biryani but also to al kabsa from Saudi Arabia.

The main ingredient for the majboos recipe is rice. It is prepared with a choice of protein such as chicken, lamb or fish, cooked until tender and then associated with the rice.

WHAT IS THE ORIGIN OF MAJBOOS?
In Arabic, majboos means “be engaged”. If today’s majboos is widespread in the Persian Gulf, it was still the ultimate dish for special occasions, especially engagements and weddings until recently.

RICE
Rice is the basis of Asian cuisine. The most important foods are often based on rice. Asians are known to have a healthy diet and for good reason. They definitely hold the record for longevity.

Scientific research has proven that rice was a source of almost perfect food, with an ideal balance between proteins, fats and carbohydrates. It is clearly the key to a healthy diet.

Majboos is a deliciously scented dish that I highly recommend.

Instructions
In a large bowl, add the rice. Rinse with water 2 to 3 times or until the water is clear. Cover with water and let stand for 30 minutes.
In a Dutch oven on low to medium heat, add the cut pieces of chicken, season with salt, and cover with 4 cups (1 liter) of water.
In a skillet on medium to high heat, add 2 tablespoons of olive oil, and add half of the sliced onions. Fry for 2 minutes while stirring.
Add the garlic, green hot chili peppers, black peppercorns, cumin seeds, coriander seeds, cardamom pods and cloves. Continue toasting for 2 minutes while stirring.
Add the turmeric, bay leaf, cinnamon stick, and dried lime. Stir for 30 seconds.
Add the spice and onion mixture to the Dutch oven with the chicken.
Stir, and cook covered for 45 minutes.
Take the pieces of chicken out of the Dutch oven and place in a large bowl.
Drain the rice, and add to the chicken broth. Cook the rice covered, on low heat, for about 20 minutes.
In a small bowl, add the turmeric, garam masala and 2 tablespoons of olive oil. Mix.
Pour the spice paste over the chicken and coat each piece carefully.
Garnish
In a skillet on medium to high heat with 2 tablespoons of olive oil, add the remaining onion. Cook while stirring for 6 minutes or until the onion turns slightly brown.
Add the pistachios, the almonds and the raisins and continue frying for 2 minutes.
Transfer the mixture to a bowl.
In the same skillet over high heat, add 1 tablespoon of olive oil, and add the marinated chicken pieces.
Toast the chicken for 2 minutes on each side.
Assembly
When the rice has absorbed all the water, after about 20 minutes, take off the heat and transfer to a large serving dish.
Top with the onion and dried fruits.
Finally, add the chicken pieces on top.