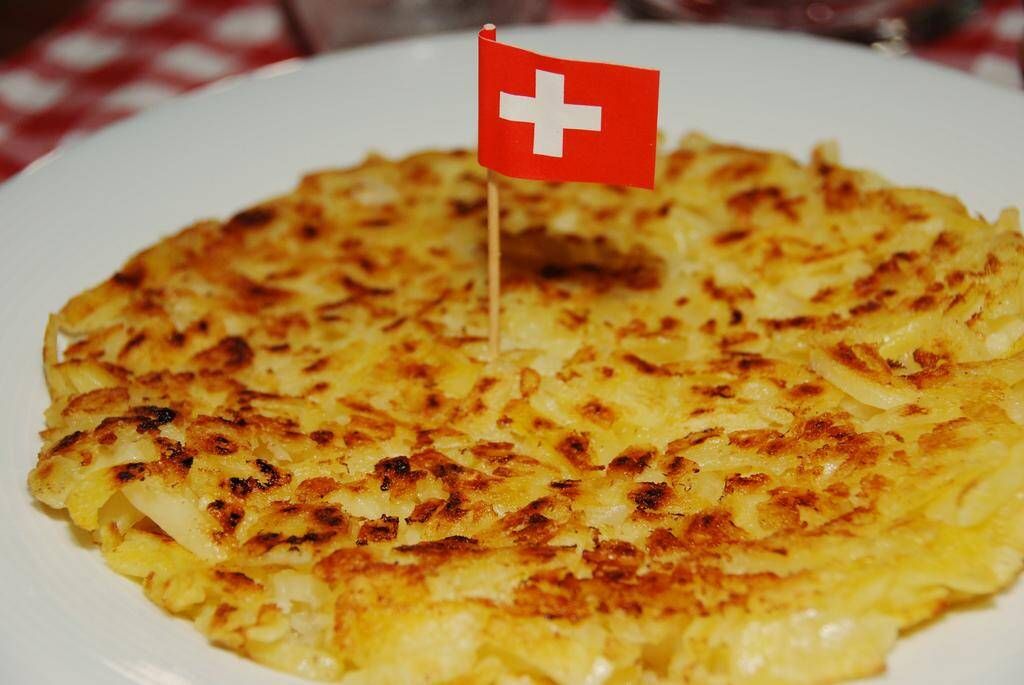 Rösti is a kind of potato cake served as a main course or side dish. The potatoes are first cooked in their jackets, then peeled and grated before being fried in butter to form a round flat cake. As a main course, the rösti can be garnished with your choice of ingredients, such as fried egg, cheese, vegetables, mushrooms or meat.

Rösti is also a tasty accompaniment for many main courses, such as sausages, Geschnetzeltes (creamy meat stew) or fish. What makes rösti unique is the Röstiraffel – a coarse potato grater invented in Switzerland in the late 1800s.

Each region now has its own rösti recipes. In Bern, for example, rösti is served with cheese, onions and bacon. In Zurich, where rösti originally comes from, the potatoes are not cooked before being grated. As a speciality from the German-speaking part of the country, rösti also lends its name to the Röstigraben, the cultural and linguistic ‘trench’ between French and German-speaking Switzerland. Rösti is now one of the country’s best-known national dishes.

The day before, steam the unpeeled potatoes for about 40 minutes. Make sure not to overboil them. Peel the potatoes while they are still warm, then chill them overnight.

Coarsely grate the potatoes, keeping the strips as long as possible. Melt the butter in a non-stick frying pan. Add the potatoes, salt and pepper, mix gently. Using a wooden spatula, lightly press the edges around the curve of the pan. Fry the rösti on one side for about 10 minutes until golden brown, then turn it over and finish frying for 10 minutes on the other side.