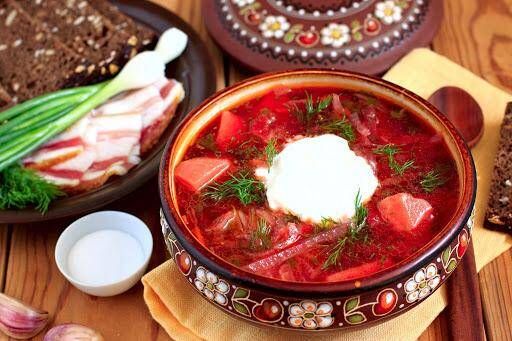 The national dish of Ukraine that undeniably originates from the country is borscht.

Despite most people associating this recipe with Russia, borscht, or as it is properly pronounced borsch, is actually Ukrainian. Yes, there is no ‘t’ at the end of the word.

A Borscht recipe is something every home should have, regardless if you’re Ukrainian or not. This traditional Ukrainian borscht combines the earthiness of beets with the freshness of dill and other vegetables. A hearty, healthy and frugal way to use up your garden vegetables and stretch your food budget while filling your family’s bellies this fall!

Because we come from a lineage of Ukrainian peasants who had to survive harsh Eastern European winters with nothing more than the few staple food items they had on hand (wheat, potatoes, cabbage and beets mostly), our traditional foods tend to feature these ingredients over and over again in various ways.

Borscht definition: a beet-based soup that can be combined with whatever else you’ve got growing in your garden to create a hearty, healthy meal that also stretches your food budget and weekly meals just a little bit further.

In the late summer and fall, there is almost always a pot of borscht simmering away on my mother’s stovetop as she makes use of the beets, carrots, potatoes and fresh dill weed that need harvesting from her garden. If it’s green bean season, she’ll throw some chopped green beans in the soup as well. If not, she’ll make do with whatever ingredients she has on hand (this also makes it a great “clean out the fridge” recipe).