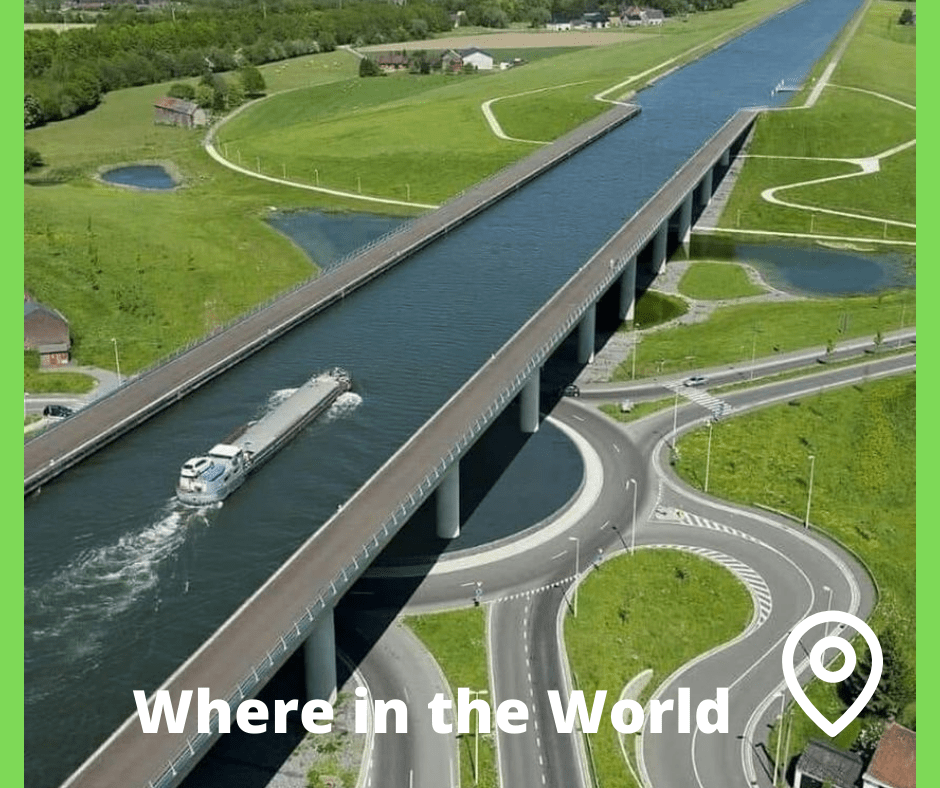 Where would you find this unreal piece of engineering?

Weighing in at a whopping 65,000 tons, the Pont du Sart Aqueduct is located in western Belgium, near the town of Houdeng-Goegnies. This massive structure was built to carry the Centrumkanaal water channel, and is one of the longest of its kind.

For centuries, Belgians have wanted an inland waterway to connect the Meuse and the Scheldt. However, the height difference of about 96 metres (315 ft) between the two rivers would require as many as 32 locks, which was not feasible. In 1879, the Ministry of Public Works adopted a proposal by Edwin Clark which used boat lifts instead of locks. The first lift (Houdeng-Gœgnies) was built between 1885 and 1888. It was inaugurated on June 4, 1888 by King Leopold II.

The three other boat lifts were finally finished in 1917 and put into service in 1919. There were several reasons for this delay. From 1894 to 1911, the economic need for the canal was repeatedly called into question. Then in 1914, when the three lifts were practically finished, World War I began.

The old canal could accommodate boats with a displacement of up to 350 tons.  In 1957 the Belgian parliament passed a law providing for a major expansion of the canal, increasing the maximum displacement of a boat that could use the canal to 1,350 tonnes (1,490 tons). In the event, it was decided to alter the course of the canal rather than to enlarge it along the full extent of its existing length. A defining feature of the enlarged canal was the Strépy-Thieu boat lift which replaced the four smaller boat lifts and one or two locks which had been part of the former canal.

The lifts on the old parallel canal remain in position, having in 1998 been designated a UNESCO World Heritage Site.