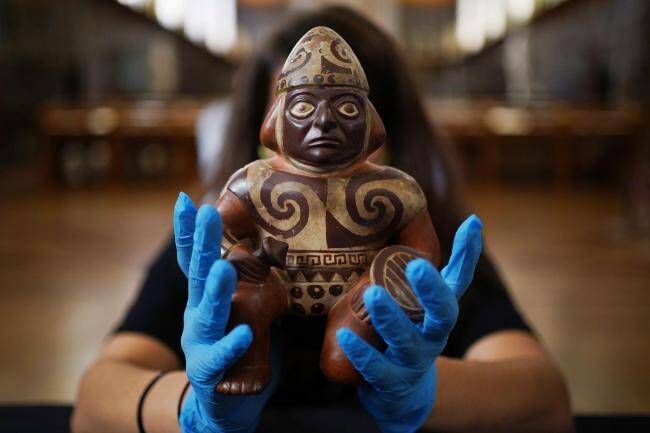 A “landmark loan of ancient objects” with some dating back to 3,000 years ago will travel from Peru to be a part of a new exhibition at the British Museum from November 11 2021 to February 20 2022.

The exhibition on the ancient cultures of the South American country will feature over 40 “remarkable objects”, with some having never travelled to the United Kingdom before, the museum said.

They will be showcased alongside around 80 other pieces from the London museum’s collection in a new exhibition Peru: A Journey In Time.

Cecilia Pardo, co-curator of Peru: A Journey In Time, said: “While the Incas are one of the most well-known civilisations from Peru, they were actually relatively recent in terms of the long history of this region.

“We’ll be taking visitors back many thousands of years earlier, to show how the extraordinary past cultures of Peru were shaped by unique ways of living within the landscapes of the central Andes, one of the cradles of world civilisation.

“They’ll discover the story of how these ancient Peruvian societies had unique approaches to economy, gender, agriculture, power and beliefs, and how they thrived against the odds right up until the Inca conquest by the Spanish.

“It will be eye-opening, and will challenge common Western assumptions about how societies are constructed.”

Peru: A Journey In Time is the first major exhibition The British Museum has curated on Peru and it will explore the rise and fall of six societies within the country across thousands of years.

It also coincides with the 200th anniversary of the country’s independence from Spain.

Among the artefacts travelling from Peru include a 2,500-year-old gold headdress and a ceremonial drum believed to be from around 100 BC to AD 650 which depicts the capture of defeated enemies in ritual combat.

The oldest object on loan is a ceremonial vessel in the shape of a contorted human body from the Cupisnique culture, which flourished along what is now Peru’s northern Pacific coast, and is thought to date from up to 1200 BC.

“The scale of the generous loan of ancient objects from museums in Peru is unprecedented and a landmark opportunity to see them here in the UK.

“The fascinating range of material on display collectively challenges perceptions of how the world can be viewed and understood.

“We are grateful for the support of Promperu for making it all possible.”

The British Museum’s Peru: A Journey In Time exhibition is supported by governmental promotional agency Promperu, and will run from November 11 to February 20.