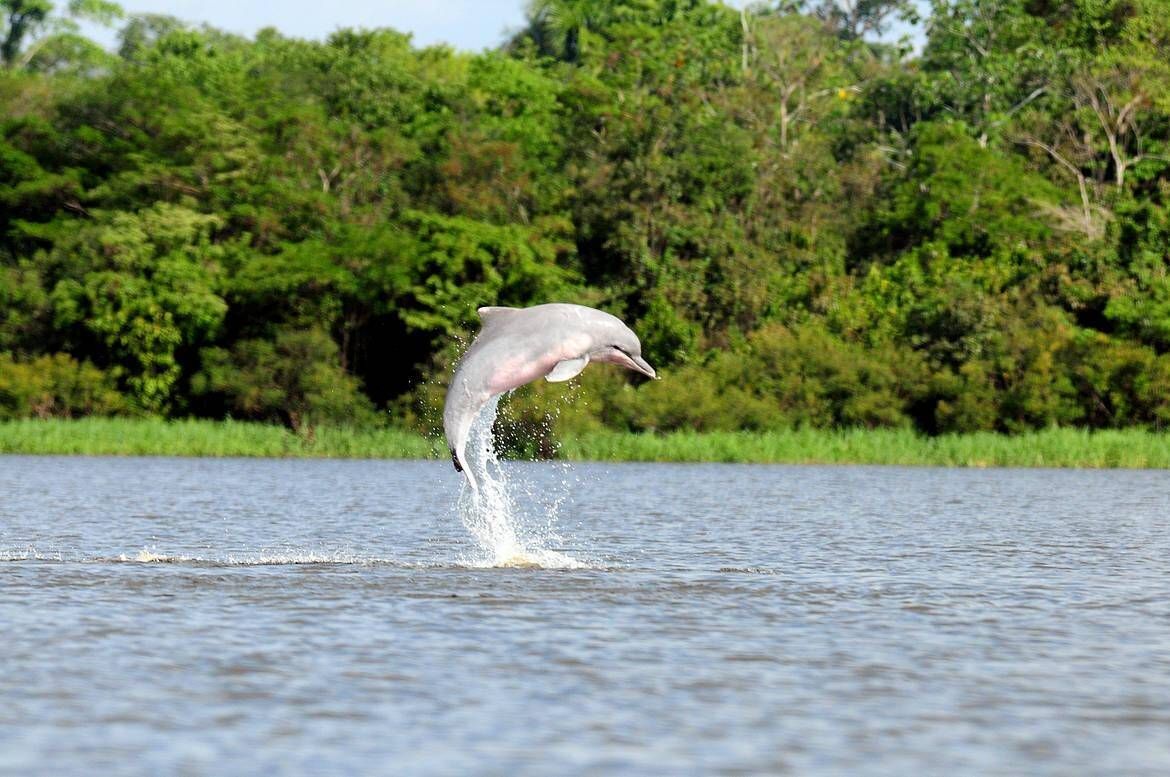 Pink dolphins, piranhas and black caiman. It sounds like the stuff of legend, but in fact they’re the inhabitants of a protected wetlands system in the Amazon, home to thousands of rare animal species and fascinating tales of tribal gods turning men into dolphins.

Storytelling is part of the culture for the indigenous groups who live in the Amazon rainforest, and the wetlands play an important part in the yarns that have been spun for centuries. The stories told by the Ticuna people are no different; one in particular involves a pink dolphin disguised in human form who attends the tribe’s traditional festivities to enchant women who become enamored by this tall, strange man. He then takes her down to the river, and turns her into a dolphin, too.
But the waters of the Lagos de Tarapoto aren’t just home to tall tales. They’re such an important habitat for animal species that they were granted protected status in 2018, following a five-year battle to petition for the wetlands region to be internationally recognized by the Swiss conservation body Ramsar.

Scientists have been conducting research in the wetlands — which include Lake Tarapoto as well as a network of other waterways — for years. The lake is fed by the Amazon River and is interconnected to numerous smaller lakes by a complex system of creeks.

Experts have identified as many as 900 plant species, 300 bird species, 176 fish, 56 reptiles, 46 mammals and 30 amphibians. The wetlands, which cover 400 square kilometers, have one of the highest presence of river dolphins in the Colombian Amazon.

Recently, Omacha, alongside the WWF and with the help of local groups, began a satellite monitoring project of the cetaceans in the Amazon region.
The wetlands are a key place for dolphin breeding, as well as a fish breeding site — a vital source of food and income for the 22 indigenous communities that live in the region. The pirarucú fish, one of the largest freshwater fish, is a species of arapaima, which are native to the Amazon River. They have been a key food source for indigenous communities for centuries and are eaten fresh, dried or salted — and can grow up to 10 feet long.

Tourism and conservation at work
The indigenous communities also rely on tourism for income, and the preservation of this water system means they can have a sustainable income for years to come. Visitors to the region can hire local indigenous guides to boat them around the lake and through the river networks, pointing out wildlife and explaining the historical importance of the site.
The wetland region is best known for Lake Tarapoto, a 37-square-kilometer body of water which is a short ride from Puerto Nariño, a town in the Amazonas region of Colombia, perched on the edge of the Amazon River.
Tourists who make it to the remote region flock to the lake in the hopes of catching a glimpse of the rare pink dolphin or trying their hand at piranha fishing. The Centro de Interpratación Ambiental Natütama, run by a non-profit, offers a host of information on the pink dolphin and manatee species.
There is still no consensus about why the pink dolphin is pink, as some of the mammals, known locally as “boto,” remain gray. Coloration varies, with adult males being the most pink, perhaps, experts surmise, because they fight a lot — and it is their scar tissue that is pink. Another theory is that they camouflage themselves to match the red mud that appears in some of the rivers following heavy rains.

Although you can swim in the lakes, they are piranha-infested, so perhaps check with your tour guide before taking a dip.
The motorized boats that were once involved in some tours, as well as logging, hunting and overfishing were threatening the biodiversity of the wetland complex, so scientists joined forces with local indigenous groups who inhabit the area to petition Ramsar, the Swiss conservation body, to declare Tarapoto a “wetland of international importance” in 2018. The area is the first wetland region in the Colombian Amazon to achieve such a status.
“Wetlands with Ramsar status are internationally recognized because of their unique characteristics of biodiversity and natural wealth, and must be conserved and used sustainably to maintain their quality and permanence over time. Large-scale mining and major infrastructure construction cannot be carried out at Ramsar sites,” says Saulo Usma, Freshwater Specialist at WWF Colombia.
Visitors wishing to experience the lake can stay at Puerto Nariño, a small town of 6,000 residents, mostly indigenous, that touts itself as an ecological community. No cars or motorized vehicles of any kind are allowed in the town — meaning all tours are done by wooden boats.
The town is reachable by plane from Bogotá, Medellín or Cartagena. Accommodation and facilities are basic, but it’s a wonderful jumping off point to explore all the Amazonas region has to offer, and a chance to experience indigenous culture in its fullest.

Working with locals to protect the wetlands
Designating the site as protected means there is the ability to finance conservation projects, according to the leaders of the local community.
“The designation of the Tarapoto lakes as a Ramsar site is an opportunity to strengthen, protect and conserve our natural, cultural and social resources,” says Lilia Isolina Java Tapayuri, community leader of the Cocama ethnic group.
Working with the local indigenous groups has been a vital part in the protection process. Sinchi Institute, another of the Colombian environmental groups that collaborated to get the lake protected, has been working with local fishermen to ensure they are involved.

“Sinchi has collaborated in the construction of the management plan for the site,” says biologist Mariela Osorno, who specializes in the Amazon region. “We’ve also accompanied fishermen from the Tarapoto system, training them to collect data, community monitoring and fishing uses of the area.”
The institute is also working with communities to produce a bird guide for the area, as well as training up villagers so they can use their skills to start bird-focused tourism ventures.
“Participants have been trained in methodologies for bird watching, species identification and use of bird guides,” explains Osorno, adding that Sincha has also worked with locals to recover the names of birds in the native languages of the territories.
“It is essential to promote its conservation and proper management, to ensure the permanence of the genetic richness of species, ecosystems and landscapes, and to safeguard the culture and knowledge of the native communities that inhabit it, particularly the Ticuna (also known as the Maguta), Cocama and Yagua ethnic groups.”
If you do get the chance to visit this beautiful and underdeveloped corner of the world, you’ll certainly leave with a renewed sense of living simply, side-by-side with nature.