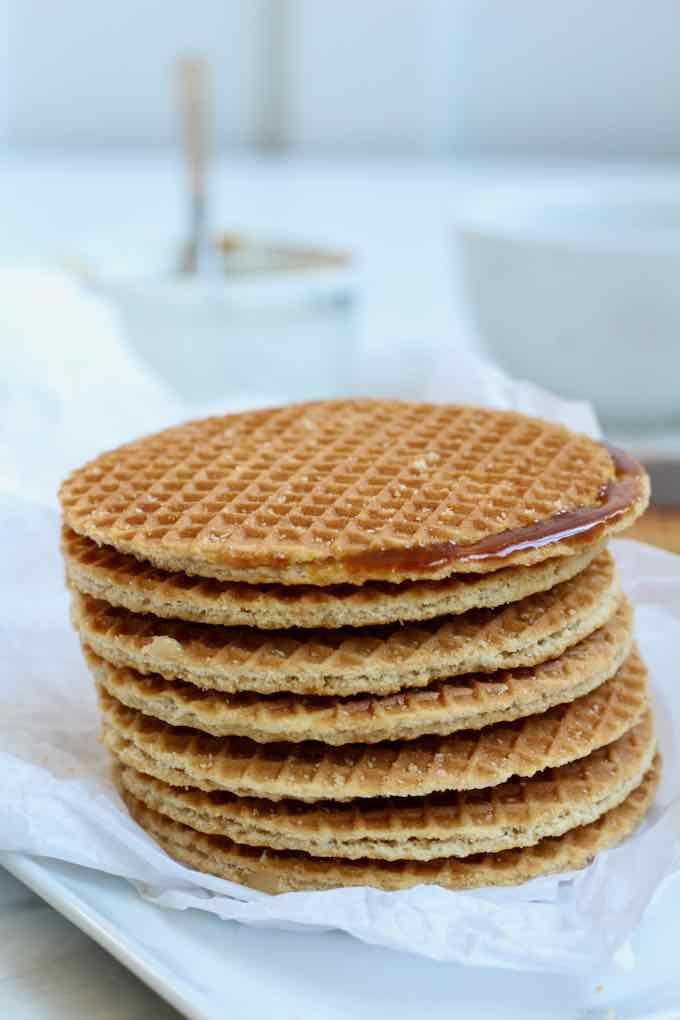 A stroopwafel is a circular waffle-type pastry from the Netherlands. The iconic Dutch waffle consists of two pieces of cookies between which a caramel syrup made from molasses is inserted. Over the years, this caramel cookie waffle has become a staple of Dutch street food and has become very popular in the world.

WHAT IS A STROOPWAFEL?

A stroopwafel is a wafer-type cookie from the Netherlands. Etymologically, stroopwafel means “waffle in syrup” in Dutch.

Thus, the wafers made in this appliance are more crunchy than Belgian waffles. The cookie looks like a sandwich topped with a layer of sticky caramel syrup.

This Dutch waffle is a circular waffle that consists of two layers of cookies 2 to 3 inches (6 to 8 centimeters) in diameter and about 1/6 inch (four millimeters) thick. It is cut in half right out of the pizzelle maker, then garnished with dark brown caramel syrup, obtained from molasses and brown sugar.

The stroopwafel is also very popular in Belgium. It is part of the tradition of Dutch and Belgian street food. They are found in kiosks at fairs.

Also, stroopwafels are particularly widespread in Flanders. They are sold at the October fair in the province of Liège.

Served hot, the stroopwafel is known in Wallonia under the name of lacquemant (lackmans). The syrup used to fill the lacquemant is a syrup flavored with orange blossom. Also, the recipe for this syrup does not include molasses.

WHAT IS THE ORIGIN OF STROOPWAFEL?

The origin of stroopwafels dates back to 1784. At the time, a baker from Gouda (a town also famous for its cheese) tried to make a waffle from leftover baked goods, more specifically crumbs and stale bread.

He pressed the crumbs flat with a waffle iron. According to the story, the first attempt was unsuccessful. The waffles were too dry and crumbled. However, to remedy this problem, the baker stuck two layers of sandwiched waffles with a sticky caramel syrup. The stroopwafel as we know it was born.

Over time, the recipe for stroopwafel has evolved. Today it contains flour, butter, sugar, yeast, eggs, milk and cinnamon. The Dutch pastry became popular in the Netherlands and more particularly with street vendors. They hastened to sell them as snacks.

However, it took more time for stroopwafel to be exported to the other side of the world. It was only when United Airlines introduced them on their morning flights that the stroopwafels entered American territory.

THE TRADITIONAL WAY TO EAT THE DUTCH WAFERS

In the Netherlands, people don’t eat stroopwafels in any fashion. Tasting the stroopwafels is the subject of a very specific ritual.

Indeed, the Dutch place their stroopwafel just above their cup of coffee so that it is perfectly balanced. Thus, the steam of the hot drink (tea or coffee) infiltrates the wafer and slightly softens the underside of the cookie. The wafer sandwich therefore offers several textures when biting into it: melting on one side and crispy on the other.

HOW TO MAKE STROOPWAFEL

To make the best stroopwafels, watch how the wafers cook. In fact, the cooking time varies from one appliance to another. Some prefer them softer and others more crunchy. It is then necessary to adapt the cooking time to taste.

In the stroopwafel recipe presented here, the cookies were baked for 1 minute and 45 seconds, and have a crunchy consistency. Be careful not to overcook the waffles, otherwise they will break as soon as the caramel filling is placed.

The caramel should also be allowed to cool slightly before spreading it over the wafers. If it is still too hot, it will leak on the sides. The original stroopwafel recipe barely shows the syrup between the layers of wafers. Indeed, one should not put too much caramel when filling the cookies because it is very sweet and very sticky.

Interested in cooking classes in Netherlands to taste this dish?
source