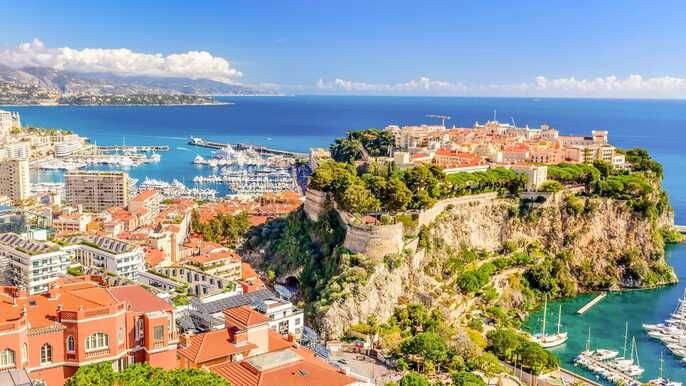 Monaco is tiny. Really tiny! It is about half a town on the southern coast of France near the border with Italy. Monaco is considered a Principality and is one of the microstates of Europe. Only around a quarter of the population is actually Monaco citizens. It is near the touristic and beautiful southern French city of Nice.

Reminiscent of the HBO series Game Of Thrones, this Principality is ruled by a house – the House of Grimaldi since 1297. Its history and status are very much tied with that of France. France is responsible for the military defence of this country and France must be consulted every time a new ruler is appointed. French citizens are also the largest resident group in Monaco, many of the people working here live in France.

This state is very very small and every square inch of this land has been used – often several times with multiple levels used for different things. For example, a piece of land may have a road and a shopping centre occupying the same space. When we say Monaco is half a town, well it kinda is. The border with France is no demarcated and the border crosses streets and cuts through houses. To know which country you are in, you really need to use your GPS.

The Principality of Monaco is beautiful and is famous for its casinos, gambling, and being the destination of the super-rich. It is common to see mega yachts in its ports.

The Principality has a reputation as a tax haven and has no income tax and has low business taxes. Over 30% of its population are millionaires.

The Principality of Monaco is a beautiful fort and has an old town that you should see. Here you can see the ruins of an old castle. This is called the City Of Monaco and is nicknamed “The Rock”. It is the seat of the Prince and the government buildings.

Prince’s Palace Of Monaco
The Prince’s Palace of Monaco was built nearly a thousand years ago back in 1191 as a Genoese Fortress. It is the official residence of the Sovereign of Monaco. In its history, this palace/fort has been besieged and bombarded by many foreign powers. Over the years the fortress was converted into the palace it is today.

Today, while it is a major tourist attraction, it is also the fully working palace and headquarters of the Prince of Monaco. It has remained the home and base of the ruling family of Monaco for 700 years.

Fun Fact: Citizens Of Monaco Are Forbidden From Entering The Gaming Grounds Of The Casino

There is little more to do in Monaco. Monaco is a tiny country designed for the mega-rich and for gambling. It is possible to walk the full length and breadth of this country in an afternoon. If you are going to Nice on the south coast of France, then Monaco is a great day trip and one more country you can tick off the bucket list. Unless you can afford very high prices, it’s best to find accommodation nearby in France. Space is very tight in this tiny country.

But it’s fun to see what a tiny Mediterranean country for the mega-rich looks like. The old part of the city is stunning and very much worth a visit. It is easily the most scenic part of the place. There are beaches where you can relax on. It also has a sizeable shopping centre for you to enjoy. Like all Mediterranean cities, Monaco has plenty of cafes and restaurants everywhere.

Most people who spend any amount of time here are the wealthy who come here for gambling and the like.

In short, Monaco is an oddity and a place fun to visit. You can see and do everything here in a single-day trip.