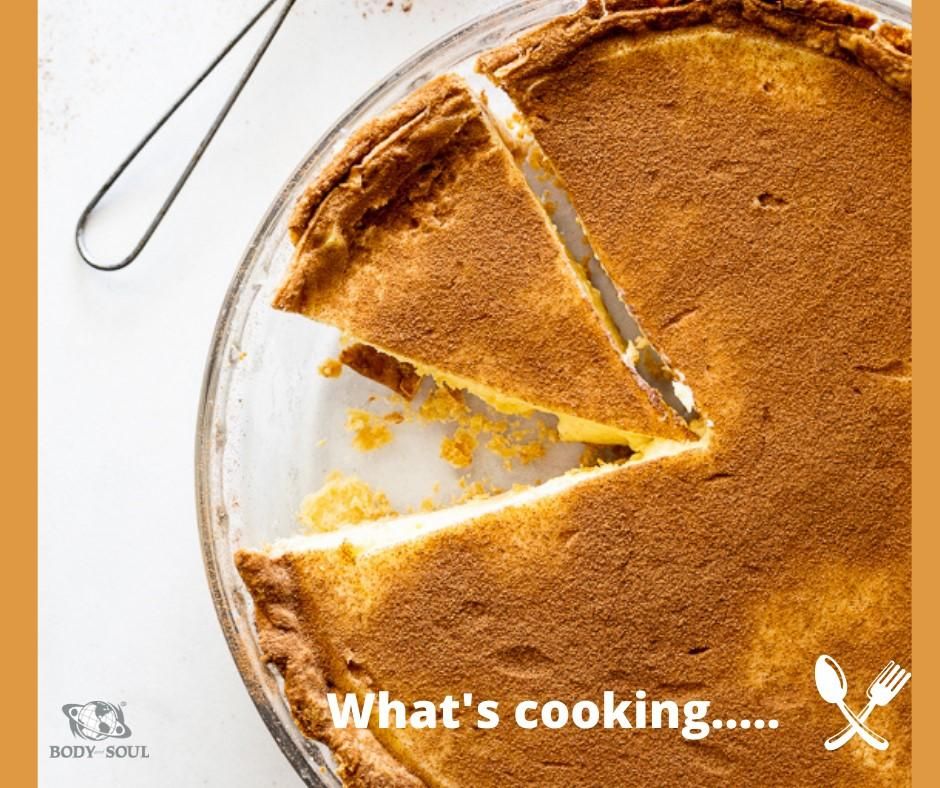 Good ol’ melktert; the Afrikaans name for ‘milk tart’; the classic, South African dessert consisting of a sweet pastry crust, filled with a mild, creamy custard of milk, flour, sugar and eggs, baked in a round pie tin and dusted with cinnamon after baking.
Milk tart is omnipresent in South Africa; it appears at every church bazaar, bake sale, home industry, supermarket, or bakery, and has surely featured on every South African food blogger’s blog.
Melktert stems from the Dutch settlers in the Cape in the 1600s.
Traditionally, the crust consisted of short-crust pastry. These days, many use ready-made puff pastry dough instead. Ancestors would turn in their graves hearing that crustless melktart has become a thing.
The large proportion of milk in the filling is evidence that melktert was introduced to us by the Dutch dairy farmers who settled the Cape of Good Hope in the middle of the century.
Cinnamon, introduced to us by Javanese slaves, is often sprinkled over the surface.
Who’d like some South African Milktart?
Ingredients
For the crust
• Follow the directions for my easy no-roll crust
For the filling
• 2 cups milk
• ½ cup heavy / whipping cream
• 5 egg yolks
• ¾ cup sugar
• 2½ tbsp cornstarch / cornflour
• 2 tbsp flour
• 2 tbsp salted butter (alternatively use unsalted butter and 1/2 tsp salt)
• ½ tsp almond extract
• ½ tsp vanilla extract
• pinch of nutmeg
• 2 tsp cinnamon
Instructions
1. Make the pastry according to recipe instructions then blind bake until golden brown and crisp. Remove from the oven and allow to cool.
2. To make the filling, heat the milk, cream, vanilla, almond extract and nutmeg in a saucepan over medium heat.
3. In a mixing bowl, whisk together the egg yolk, sugar, flours and salt.
4. Once the milk is hot, whisk two ladles full of the milk into the egg mixture to temper the eggs.
5. Pour the egg mixture back into the saucepan and cook until thickened, whisking continuously. Cook the custard for 2-3 minutes until thick and smooth.
6. Pass the custard through a fine-mesh sieve. Beat in the butter.
7. Pour the custard into the prepared crust. Spray a piece of parchment paper with cooking spray then press onto the surface of the custard to avoid a skin from forming.
8. Place the milk tart in the fridge and allow to set for at least 4 hours but ideally overnight.
9. Before serving, dust the cinnamon over the milk tart. Slice and serve.
Interested in cooking classes in South Africa to taste this dish?