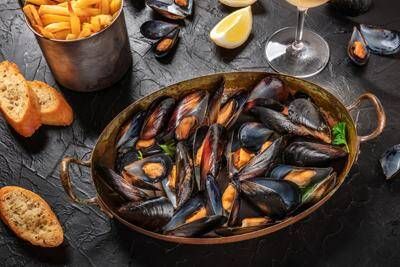 Moules-frites (mussels and French fries) are one of the most popular dishes in Belgium that can also be found in the north of France. A simple combination of mussels cooked with various spices and potatoes fried in beef fat.
The origin of moules-frites is invariably associated with Maison Fritz of Liège where they were served for the first time in 1875. Since then, moules-frites have become widely popular in the north of France and in particular during the big annual fair in Lille where vendors compete for the highest stack of mussel shells. The record was broken in 2009 with five hundred tons of mussels and thirty tons of fries consumed.

Mussels should be sorted and cleaned before use, and broken ones should be discarded. Separately, prepare the sauce with butter and a mixture of finely chopped vegetables such as celery, leek, onion and shallots. The whole is flavored with thyme, bay leaf and black pepper.

Once the aromatic garnish is sweated, add the mussels and immediately cover the pot for steaming. By shaking the pot vigorously, the mussels are allowed to mix and open more easily. Finally, add the white wine and continue cooking for a few minutes. The mussels are ready as soon as they open. Those that do not open should not be consumed.

The proper preparation of the fries is essential. Choose a suitable variety of potatoes, otherwise they will disintegrate when cooked. Once washed, peeled and washed again, the potatoes should be thoroughly dried. They are then cut in sticks and then dried again.

The first frying is done in beef fat at a temperature of 280 F (140°C), it is best to use a kitchen thermometer. The temperature drops as soon as the fries are added, and it is important that it goes up quickly to cook the fries evenly.

After six minutes of cooking, the fries should be removed, drained thoroughly and allowed to cool. The temperature of the beef fat is then increased for the second fry at 350 F (180°C), which will make the outside very crisp. The first stage of making the fries can be done in advance and the second frying when the mussels begin to open.

The mussels are generally served in a pot and shared at the table. The fries are served separately to prevent them from getting soggy in the cooking juices from the mussels.

Moules-frites are usually eaten with beer or dry white wine.