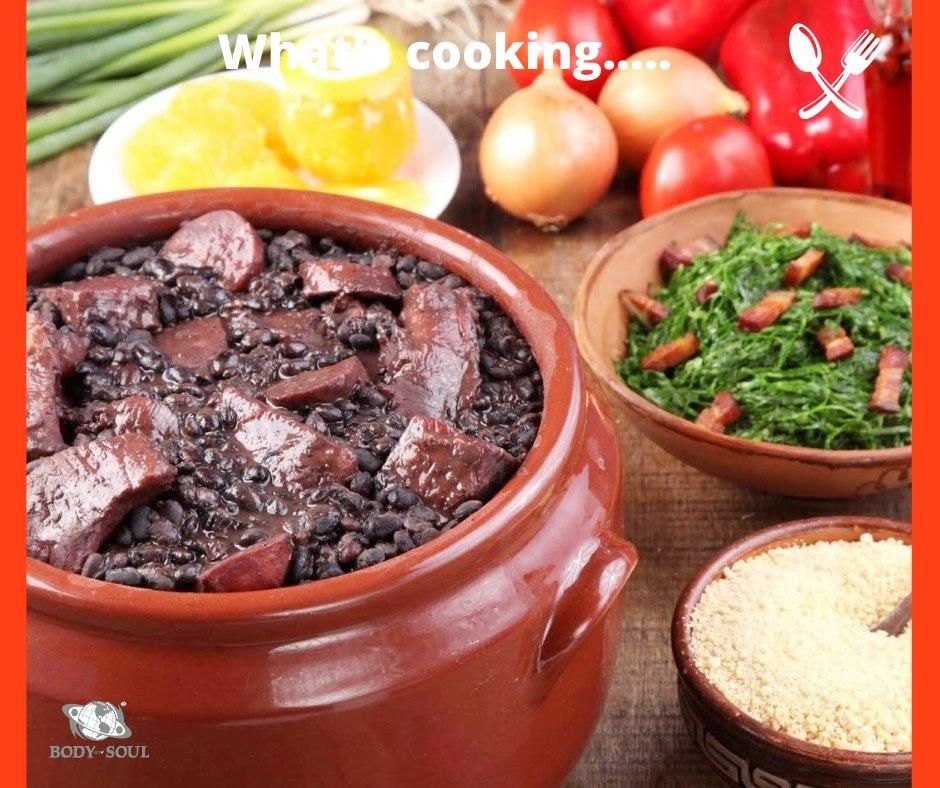 Feijoada, a popular Brazilian dish, owes its name to its main ingredient, black beans (feijão). It is a rich stew traditionally made from different parts of the pig.

Some historians say that feijoada (pronounced fay-jwa-da) is a dish that was created by African slaves. After feasts given by the owners of the plantations, the slaves would pick up the leftovers and mix them with black beans, making a new stew.
This new dish they served with farofa (fried cassava flour with bacon) and orange slices.

Whichever the story is, feijoada is a symbol of the fusion within Brazilian gastronomic culture. It is a Brazilian icon.

1 – Soak beans in hot water
Pour boiling water over the black beans and let them sit while you prepare the rest of the stew.
2 – Brown the pork shoulder
Heat the olive oil in a large pot over medium-high heat and brown the pork shoulder. When the meat has browned, remove the meat from the pot, set aside.
3 – Brown the onions, add garlic
Add the onions to the pot. Brown them, stirring occasionally, scraping up any browned bits from the bottom of the pot.
Sprinkle a little salt over the onions and add the garlic. Stir well and sauté 2 more minutes.
meat, bay leaves, cover with water, simmer
4 – Add back the pork shoulder, and the other meats and add enough water to cover. Add the bay leaves, cover and bring to a simmer. Cook gently for 1 hour.
5 – Add soaked black beans, simmer
Drain the black beans from their soaking liquid and add them to the stew. Simmer gently, covered, until the beans are tender, about an hour and a half.
6 – Add tomatoes and simmer
Add the tomatoes, stir well and taste for salt, adding if it’s needed. Simmer this, uncovered, until the meat begins to fall off the ham hock, which will probably take 2-3 hours.

Serve with white rice, Orange slice and hot sauce. A classic side dish would be sautéed collard greens.
It has been claimed that biscuits were sent by wives and women’s groups to soldiers abroad because the ingredients do not spoil easily and the biscuits kept well during naval transportation.
However, this information has been contradicted with the claim that Anzac biscuits were never sent to soldiers and were instead eaten by Australians and Kiwis at home in order to raise funds for the war.
In general, it is unclear which of these two competing claims is true. However, it’s delicious and will be great to cook it!!!
it look delicious!!!
Ingredients
1 cup plain flour
1 cup rolled oats
1 cup brown sugar
1/2 cup coconut
125g Butter
2 tbs golden syrup
1 tbs water
1/2 tsp bicarbonate of soda
Method
1 – Sift the flour into a bowl. Add the sugar, rolled oats and coconut.
2- Melt the butter in a saucepan, then add golden syrup and water.
3 – Stir the bicarbonate of soda into the liquid mixture.
4 – Add the liquid to the dry ingredients and mix thoroughly.
5 – Place walnut-sized balls of mixture on a greased tray and bake at 175C for 15-20 minutes.
6 – Biscuits will harden when cool.
Do you want to know more about the traditions of Brazil?