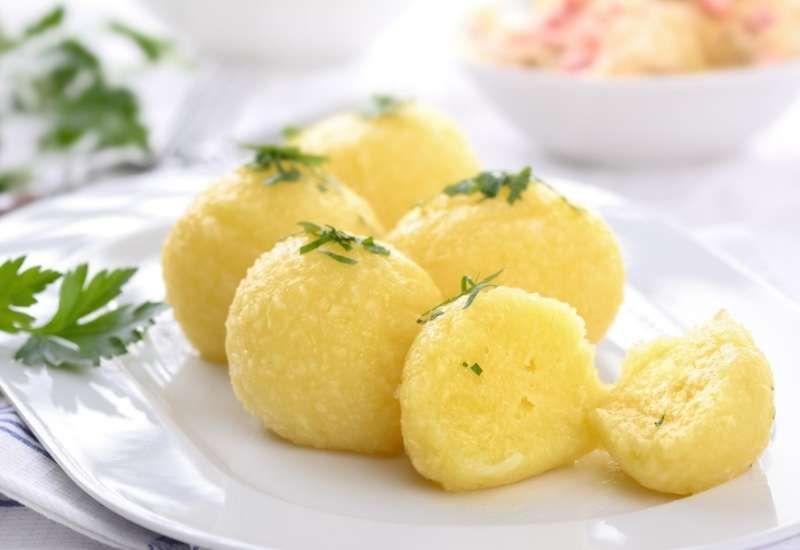 A unique use for old bread, knödel are tender German bread dumplings reminiscent of moist, savory bread pudding. When rolled into balls, they’re an airy accompaniment to braised meat such as rouladen and sauerbraten. Formed as a log and then sliced and pan-fried, they’re a tasty snack on their own.

Knödel is the German word for dumpling, and as such there are dozens of varieties. The most popular, however, are probably semmelknödel, which are made from day-old bread rolls (semmeln) soaked in warm milk and seasoned with onion, parsley, and a pinch of nutmeg.

There are two basic ways to form bread-based knödel.

Knödel of all kinds are enjoyed throughout Germany, from Bavaria and the Black Forest in the south to Thuringia—where knödel are called klöße—in the north, as well as in Austria and the Czech Republic.

How to Serve Knödel

In Germany, freshly boiled knödel are served as a side dish to accompany hearty fare like braised meat, gravy, roast pork, and lentils. For added flavor and texture, try pan-frying your boiled serviettenknödel in melted butter. Serve pan-fried knödel as an appetizer with ham, sauerkraut, and mustard. Pan-frying works best for knödel made using the log method, since they have a flat surface area that yields even browning.

Interested in cooking classes in Germany to taste this dish?
Source: masterclass